The Maharaja of Patiala, Emma Chamberlain and a Controversy!

When popular US YouTuber Emma Chamberlain wore the Maharaja’s necklace on the Red Carpet, it was mayhem on the web 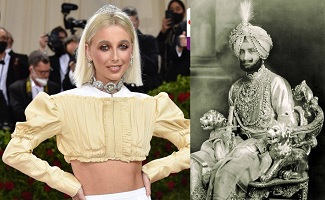 At the Met Gala popular US YouTuber Emma Chamberlain wore a necklace for which she was widely criticized. The antique necklace that she had worn originally belonged to Maharaja Bhupinder Singh of Patiala, and designed by luxury jewellery maker Cartier featuring a De Beers diamond once the seventh largest stone in the world. The controversy surrounding this necklace was that this piece of jewellery had disappeared from the Royal Treasury of Patiala around 1948. Claimed to have been repurchased by Cartier at a charity function, the luxury jeweller was highly criticized for allowing Chamberlain to wear a “part of India’s stolen history”.

Chamberlain’s fashion choice was as per the dress code ‘Gilded Glamour’ - a nod to the 19th century Gilded Age in the United States that encompassed a period between 1870 and 1890 where there was “unprecedented prosperity, cultural change, and industrialization.” Guests were expected to look to ‘Gilded Age New York’ for inspiration. Chamberlain was at the Met Gala in the capacity of being the brand ambassador for Cartier and dressed head to toe in Louis Vuitton, her outfit was paired with a vintage platinum and diamond Cartier tiara dating back to 1911. In an interview with Vogue, she said, “During the Gilded Age, it was all about being extravagant and I’ve never seen a more extravagant necklace.” Cartier and Chamberlain both have had to face considerable backlash over donning the necklace on the Red Carpet. Indians, South Asians, American Indians said it was in poor taste for the jewellery brand to allow an influencer to flaunt stolen goods on the Met Gala red carpet.